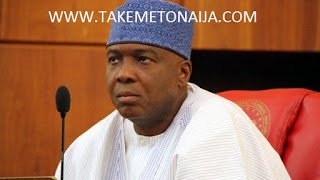 EARLY LIFE AND BACKGROUND
Abubakar Bukola Saraki was born on 19 December 1962 to the family of Olusola Saraki, a one time Senate Leader (1979 – 1983) of the Federal Republic of Nigeria. He attended King’s College, Lagos, from 1973 to 1978, and Cheltenham College, Cheltenham, London from 1979 to 1981 for his High School Certificate. He then studied at the London Hospital Medical College of the University of London from 1982 to 1987, when he obtained his M.B.B.S (London). He worked as a Medical Officer at Rush Green Hospital, Essex,
from 1988 to 1989. He was a Director of Societe Generale Bank (Nig) Ltd
from 1990 to 2000. He was appointed special assistant to the President
on Budget in 2000. Ceremonially, he also serves as a tribal nobleman of high rank in his capacity as the Turaki of the Ilorin Emirate.

CAREER AND LIFE
Dr. Abubakar Bukola Saraki’s political career began when he was appointed Special Assistant to President Olusegun Obasanjo on Budget in 2000.
While holding this position, he initiated the Fiscal Responsibility
Bill and served on the Economic Policy Coordination Committee, where he
was responsible for the formulation and implementation of several key
economic policies for Nigeria.In 2003, he ran for the office of the Executive Governor of Kwara State on the platform of the People’s Democratic Party (PDP)
and won. He was sworn into office in May 2003. He ran again for
re-election in 2007 and won his second term. As governor of Kwara, he
led reforms in agriculture, health, education, finance and environment
policy. One of his major achievements was inviting displaced white
farmers from Zimbabwe to Kwara State and offering them an opportunity to
farm. This led to the establishment of Shonga Farms
programme, which is now being replicated across Nigeria. His charisma
among his fellow governors got him appointed as Chairman of the Nigeria
Governors Forum.
Under Dr Saraki’s Governorship, Kwara became the first state to complete
the Nigeria Independent Power Project. In collaboration with the Power
Holding Company of Nigeria, Dr Saraki re-energised the Ganmo Power
Station at Ilorin, and connected over 375 rural communities to the
National Grid, through the development and installation of 725
transformers and 7 substations.Kwara also completed 4 electrification projects that meant power became
stabilised for 18–22 hours a day. 90% of people living in Kwara have
access to electricity, which compares to a national average in Nigeria
of 30%.

While in office, Dr Saraki introduced a range of new health
programmes, including a state-wide campaign in 2008 to reduce maternal
and child mortality with regard to Malaria. This included the
distribution of insecticide-treated nets and free malaria drugs to
pregnant mothers and to children under the age of five.
A state-wide programme of hospital development was also implemented,
leading to the redevelopment of hospitals in Afon, Patigi and Lafiagi.

Other measures implemented by Dr Saraki included improved training
and re-training for medical staff; refurbishment of hospitals and staff
living quarters; and employment of qualified medical doctors and other
health workers. Many of the primary care programmes were sponsored by
international agencies such as WHO and UNICEF.Dr Saraki introduced a range of reforms to agricultural policy to
increase the commercial viability of farming, and to increase exports to
international markets. The New Nigerian Farmers Initiative was designed
to improve the technical capability of farmers and to ensure farmers
had a significant financial stake in new investment in agriculture. The
scheme utilised the under-used resource of agricultural expertise in the
Zimbabwean farming industry, and worked with the Zimbabwe Commercial
Farmers’ Union to identify high-skilled farmers able to support the
State’s farming industry to move to Kwara and develop the industry.

A commercial hub was also developed to build capacity support training of the indigenous farming community.Dr Saraki led a number of significant and state-wide infrastructure
developments, including improvements at the Ilorin International Airport
Cargo Terminal; extensive road construction; and the development of new
sporting facilities such as Kwara Football Academy. The State also has
an on going aim to become a logistics and cargo hub in Nigeria and the
region.Dr Saraki became Chairman of the Nigeria Governors Forum in 2007. Under
Saraki’s Chairmanship, a reformed Forum was established, with a fully
resourced secretariat, with a technical and administrative division that
was entirely focused on delivery.

One of the most widely recognised achievements of the Nigeria
Governors’ Forum was its intervention over the problematic assumption of
power by then Vice-President Goodluck Jonathan, following the illness and subsequent death of President Umaru Musa Yar’Adua.
On 23 November 2009, President Yar’Adua left Nigeria and travelled to
Saudi Arabia, where he was installed in the King Faisal Specialist
Hospital and Research Centre in Jeddah for the treatment of what was
reported to be acute pericarditis. He was not seen in public again and
his absence created a dangerous power vacuum in Nigeria. The problem was
that, for the Vice-President to succeed the President, the constitution
demanded that the latter wrote a letter to the National Assembly making
clear the appointment of the former. But as President Yar’Adua was
constantly in and out of intensive care, this letter was never written
and the succession therefore came into question.

Under Dr Saraki’s chairmanship a number of Memoranda of Understanding
(MOUs) have been signed, including but not limited to the World Bank,
DFID, Bill & Melinda Gates Foundation, GAVI, UNICEF, UNDP.

He was the first Nigerian Governor to be awarded the National Honor of Commander of the Order of the Niger (CON) Ceremonially, he also serves as a tribal nobleman of high rank in his capacity as the Turaki of the Ilorin Emirates.After his two-term tenure as governor of Kwara State,
Bukola Saraki ran for the office of Senator of the Federal Republic of
Nigeria representing the Kwara Central Senatorial District and won,
succeeding his sister, Gbemisola Saraki-Forowa.
He was appointed as the Chairman, Senate Committee on Environment and
Ecology and is also a member of the Senate committee on capital Markets
and Finance. He also pushed a motion in the Senate to end the fuel
subsidy regime in Nigeria which has been an excessive waste of the
country’s national resources.

As a member of the Senate, Senator Saraki has campaigned extensively
on health, food security, education and the environment. He was
appointed as the Chairman, Senate Committee on Environment and Ecology
and is also a member of the Senate Committees on Capital Markets and
Finance. He also pushed a motion in the Senate to end the fuel subsidy
regime in Nigeria, which has been an excessive waste of the country’s
national resources. His work on the oil industry, has also led him to
focus on arguing to strengthen laws relating to the clean up of oil
spills. His National Oil Spill and Detection and Response Agency
Amendment Bill seeks to ensure oil companies pay appropriate levels of
compensation to communities affected by oil spills.

Dr. Saraki has also intervened in the Lead Poisoning crisis in
Zamfara State in 2010, and has supported to the Global Alliance for
Clean Cookstoves, which ensures safe and healthy methods of cooking for
millions of Nigerians while conserving the environment through reduced
deforestation. He has been a lead campaigner in the areas of desertification and climate change in the Senate and across Nigeria.
Dr Saraki sponsored a motion on the floor of the Senate to end
Nigeria’s fuel subsidy regime. Other motions and private member bills he
has sponsored include the National Oil Spill Detection and Response
Agency Amendment Bill 2012, which was aimed at putting a halt to oil
spills in the Niger Delta, the Gas Flaring Prohibition Bill 2012 and the  Climate Change Commission Bill 2013.

3. He studied medicine at the London Hospital Medical College of the
University of London from 1982 to 1987 and practiced as a medical doctor
at Rush Green Hospital in London.

4. His political career kick started when he was appointed by the
former president Olusegun Obasanjo his special assistant on budget
issues in 2000.

5. He was the one who initiated the Fiscal Responsibility Bill and served on the Economic Policy Coordination Committee.

6. On 2003 under the umbrella of the then ruling party, the Peoples
Democratic Party, he ran for and won the governorship of Kwara state.

7. He was Kwara state governor for two terms, from 2003 till 2011, and had mostly positive reviews of his job.

8. He was the first Nigerian governor to be awarded the national honour, a Commander of the Order of the Niger (CON).

9. Many governors have tried to copy Saraki’s community health
insurance scheme, environmental ‘Clean and Green’ scheme and
agricultural transformation scheme, which have been praised as one of
the reasons Kwara is a profitable and clean state.

10. Before becoming a senator, he was the former chairman of the Nigerian Governor’s Forum.
Saraki’s fierce opponent,

RUMORS AND SCANDALS
He has been involved in several fraud scandals during his his 8 year reign as the governor of kwara state. He’s been investigated by efcc several times for money laundering and fraud but nothing was found against him.