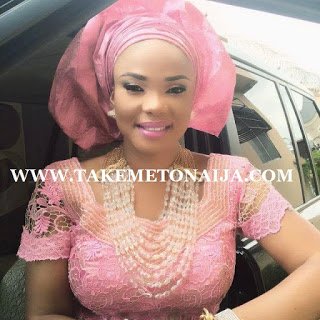 Iyabo Ojo is a Nigerian actress who started her career as far back as 1998, she made her debut in a Nollywood movie but later crossed into the Yoruba movies segment. She is an A-list actress and producer and she’s featured in over 150 movies.

Iyabo was born on December 21, 1977 in Lagos, Nigeria but hails from Itoko, a suburb of Abeokuta, the capital of Ogun State, southwestern Nigeria. She obtained her West Africa School Certificate at National College, Gbagbaga in Lagos before she proceeded to Lagos State Polytechnic where she received a diploma certificate in Estate management.

She later got married and had two kids-Festus and Pricilla. She became an
actress in 1998, after she met Bimbo Akintola in 1997, she took her round
the industry and she was given an opportunity to showcase her talent
through Keppy Ekpeyong in 1998. She played a sub- lead role in a film
titled “Satanic”, that was her first time of ever facing a camera. In
1999, She got married and she had a son and in 2001, she had her second baby, a
girl.
She came back to
the industry, but she was told she has to be travelling to the East, as a
Yoruba girl, She decided to pitch her tent with Yoruba. She then joined ANTP, she also joined Odunfa Caucus where they have the likes of Alhaji Hassan
Taiwo (Ogogo), Alhaji Yinka Quadri, Alhaji Abbey Lanre as the leaders of
the group.

In 2002, she was very lucky to have featured one of Yinka
Quadri’s films-“Baba Darijiwon” and till now she have been acting. And in
2004, She started producing her own movie. Her first film was “Bolutife”,
thereafter she did  “Bofeboko” “Ololufe” “Esan” and  “Okunkun biribiri”.

She has featured in over 150 movies and have produced over 14 movies
of her own which
includes Botife her 1st movie, Bofeboko, Ololufe, Ana si ana, Agogo
ide, Ero mi, Iyan ogun odun, Wole akudaya, okunkun biribiri, award
winning Omo gomina, Arinzo, Tenbelu and her most three recent english
movies Silence, Beyond-disability and Black Val yet
to be released
The 37yrs old actress, producer, enterpreneur
and a mother of two, 16yrs old Festus Oladunjoye Ojo (son) and 14yrs old
Priscilla Ajoke Ojo (daugther) has also won alot of awards both local
and international. In January 2015, her movie, titled Silence which featured Joseph Benjamin Alex Usifo, Fathia Balogun and Doris Simeon was premiered at the Silverbird Cinemas, Ikeja in Lagos.

The single mother of two separated from
the father of her kids over a decade ago but she is willing to try
again. In a recent interview with City People, the controversial actress has said that she has a man in her life and will be giving marriage another shot soon.
SPEAKING IN AN INTERVIEW
‘I
am getting married soon. You see my definition of marriage is undiluted
happiness. Ever since I have been separated, there’s only one goal and
that is happiness and that is what I look for. When you are married, you
will have sound mind and then you can concentrate on achieving so much
on your kids, your work and businesses. I am very hardworking and very
determined and I don’t compromise my happiness. I can’t trade it for
anything. My happiness comes first, Iyabo said.
Speaking
further, she said: ‘I have a man in my life and we have been together
for a while now. I love him, he cherishes my happiness and can’t
compromise it as well. He supports everything I do but sometimes the
best boyfriend may not be the best husband, but I leave all to God to
perfect all that is left.’

awareness on the mental issue caused by childabuse in SILENCE 2014
12. SILENCE Best Movie of the Year
[BON]
AWARDS 2014
13. Africa MouthPiece int. Woman of he year
Award 2015.
She is the CEO of FESPRIS LIMITED
(Fespris Production, Fespris World, Fespris Academy, Fespris Beauty
Academy), AND also the founder and
president of Pinkies Foundation